Tea production in Fujian province is concentrated in two regions: the Wuyi Mountains and Anxi County (Pheonix Mountains). Both are major historical centers of oolong tea production in China. Oolong tea developed in Fujian province, historically it can be traced back 1,000 years to an traditional form of tribute tea made for the Emperor and Royal Family called Beiyuan tea – compressed cakes of “wax tea” or lacha. Beiyuan tea was the earliest known tribute tea produced during the Song Dynasty (960–1279AD) however its origins date back to the earlier Tang Dynasty (618-907AD). There are a few versions of how Wulong tea received its name. The most likely naming origin was that the dragon, in Chinese mythology, is closely associated with the phoenix thus a new tea for the Royal Family would also need an esteemed name thus dragon (Long). It has been said that the oolong tea is dark, long and curly. Wu is a word that denotes the color black thus the tea being called Black Dragon Tea (Wulong – oolong). The reality may never be known. Oolong tea is a semi-oxidized type of tea that fills the gap between green tea (non-oxidized) and black tea (fully oxidized). Oxidation levels of oolong tea range from roughly 10% (very green) to 70% (heavily oxidized). Oolong teas are generally considered to be the most complex type of tea, combining qualities of both green tea and black teas, creating a very different experience. While the finest green tea and black teas are made from young, tender buds and one or two leaves, oolong teas undergo more mechanical stress during processing and more mature leaves are often used (3 or 4 leaves and a bud). The processing of oolong tea consists of 5 main steps: Withering & bruising – First Firing (Roasting) – Rolling – Second Firing (Drying) – Sorting & Grading.

Click here to learn about the health benefits of oolong tea 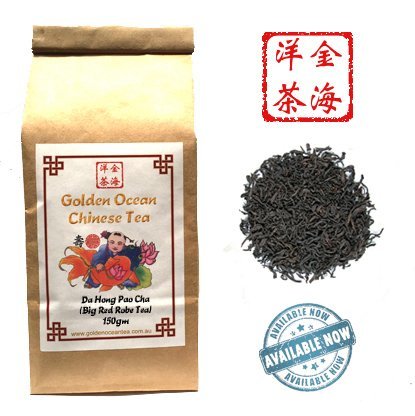 Da Hong Pao is a Wuyi rock tea grown in the Wuyi Mountains. It is a heavily oxidized, dark oolong tea. According to legend, the mother of a Ming dynasty emperor was cured of an illness by a certain tea, and that emperor sent great red robes to clothe the four bushes from which that tea originated. Six of these original bushes, growing on a rock on the Wuyi Mountains and reportedly dating back to the Song dynasty, still survive today and are highly venerated. Famously expensive, Da Hong Pao can sell for up to US$1,025,000 per kilogram or US $35,436 per ounce (20g of Da Hong Pao tea from one of the mother plants was sold for ¥156,800 in 1998).

In recent years, a number of companies have invested in preserving the interest in this tea and other so-called "artisan" teas, which typically are of very high quality and have rich histories as is true with Da Hong Pao. These have an initially high cost of production (and typically are only considered authentic when grown in their place of origin), but, as they have quickly become popular in Western countries, prized selections of the tea are available each year, with quality being consistent because of the increased popularity of the tea.

Cuttings taken from the original plants have been used to produce similar grades of tea from genetically identical plants. Taste variations produced by processing, differences in the soil, and location of these later generation plants is used to grade the quality of various Da Hong Pao teas.

Due to its high quality, Da Hong Pao tea is usually reserved for honored guests in China.
Save this product for later